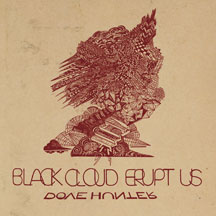 Dove Hunter's Black Cloud Erupt Us, their 2nd full length, features a harder edge than their debut The Southern Unknown. Their new stripped down 4 piece lineup take's their unique brand of Texas psychedelia into more cosmic realms than the high plains drift of their debut, evoking the best of Physical Graffiti-era Led Zeppelin and John Fahey, with some of Crazy Horse's darker moments thrown in for good measure. Winning the Dallas Observer Music Award (Best Alternative Band), and being nominated several times in Fort Worth Weekly Music Awards (Best Alt-Country) and (Best Live Rock Band), it seems the press has a hard time pinning down exactly what Dove Hunter is. Their classic rock sensibilities collide with dub backbeat rhythm and winding indie rock guitar patterns, all the while being sweetened by thoughtful, whispered vocals. Their sound has been described as "southern rock Slint" or "Brian Eno produced Allman Brothers". After recording Black Cloud Erupt Us at the Echo Lab in Denton, TX, Dove Hunter will be bringing their exciting live show on tour in 2015