A deranged ex-con seeks revenge after learning that his original screenplay has been stolen and made into a movie without his permission.. 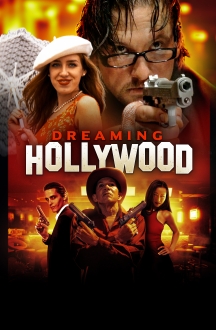 Raymond Balfi, a lonely Los Angeles resident has written a movie screenplay called, "The Dog's Meow." He sends out 100 copies to 100 studios. With the millions of dollars he will earn, he will finally be able to leave his life of crime and free his prostitute girlfriend from the authority of gangster, Rudy Aquanikkio.

The problem is; Ray is not a real writer, his story is terrible, and Maureen was never his "girlfriend." As the rejection letters mount, Ray is driven to the point of suicide. That is, until he finds out that someone has stolen his story and made it into an actual movie. Ray is now motivated with a new lust for life...and for blood.

So who should die for this? Who stole "The Dog's Meow?" Everyone he meets, is a suspect. He's bound to eventually kill the right person.

Described as “Fear and Loathing in Las Vegas” meets Tarantino action, DREAMING HOLLYWOOD takes a deep dive into dive into Ray Balfi’s bizarre world of drug dealers, prostitutes, dirty cops and social rejects as he tries to begin a new life-direction and shops his cartoon screenplay to 100 L.A. production companies.

A surreal revenge thriller described as “Fear and Loathing in Las Vegas meets Tarantino,” Dreaming Hollywood is all about Ray Balfi, a struggling screenwriter who has pitched his script for an animated movie to about a hundred production companies in the LA area, and been rejected by all of them.

People burst out laughing in menacing ways, dance without warning, explode with violence unexpectedly, and are given such odd direction that their characters, while despicable, are impressively weird.

Dark humor, crazy characters, and extreme situations follow in his wake, proving this well-shot feature film will more than likely earn repeat viewings as a future cult classic, especially among anyone who considers themselves a fan of the Cohen Brothers filmography.

‘Dreaming Hollywood’ could be a breath of fresh air for someone looking to get away in a quirky world filled with unique characters.”

Dreaming Hollywood’ takes a deep dive into dive into Ray’s bizarre world of drug dealers, prostitutes, dirty cops and social rejects as he tries to begin a new life-direction and shops his cartoon screenplay to 100 L.A. production companies.