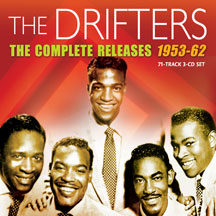 The Drifters were one of the most successful and enduring groups on the R&B and soul scene, re-inventing themselves in different line-ups over the years to enjoy a lengthy chart career. This 71-track 3-CD collection focuses on the first decade of that career, when the group initially featured Clyde McPhatter as lead singer, before he embarked on a solo career, and the group went through several incarnations before Ben E. King became the featured vocalist during the latter years of the period covered. It comprises every record they released during that time, on which The Drifters received a label credit or on which they certainly performed (as on three titles released as Clyde McPhatter solo singles) - it also features a couple of rarities done under other names by Drifters line-ups. It includes 28 US chart entries, with 23 R&B hits, five of them No. 1s, as well as 19 pop hits, and naturally features classics like "Money Honey", "Dance With Me", "Save The Last Dance For Me", "When My Little Girl Is Smiling" and "Up On The Roof". It provides a comprehensive, definitive, and thoroughly entertaining overview of the important formative years of one of R&B's great vocal groups.