Like a mash-up of ROBOCOP and LETHAL WEAPON with added Kung Fu, this movie will keep you hooked with its thrilling pace and fabulous sci-fi premise. 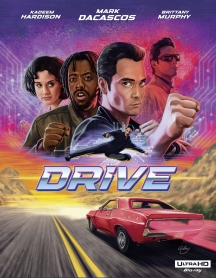 When special agent Toby Wong (Dacascos) is fitted with an advanced bio device giving him super-human powers he fears that he and the new technology will be exploited for ill gain when the Chinese government takes back control of Hong Kong. Fleeing to San Francisco he plans to sell the device to a company in Los Angeles but when he teams up with down on his luck singer Malik (Hardison) he finds himself being pursued by ruthless assassin Madison and his band of mercenaries. Like a sort of mash-up of ROBOCOP, IRON MAN and LETHAL WEAPON with added Kung Fu along with an all-star supporting cast cast that includes Brittany Murphy (Clueless), Sanaa Lathan (Alien vs Predator), Tracey Walter (Repo Man) and Ron Yuan (Mulan), this unashamed hybrid genre piece will keep you hooked with its thrill a minute pace and fabulous science fiction premise.

You know... Every now and again somebody somewhere sends me a video tape that I have absolutely no expectations for, and it kicks my ass. DRIVE... Well... It kicked my ass. First off, this is a film that went straight to video here in the United States, and ya know.... It shouldn't have. It's vastly entertaining.

Drive doesn't have any outsized ambitions, but it still is a good deal better than its straight to video background might suggest. A decent if derivative premise and some outstanding fight and stunt work make this goofily enjoyable, and this Blu-ray relea

Drive is a fun little gem that most people missed because it has the straight-to-video stink on it. But if you're a fan of action movies with a little more to them, Drive comes recommended on Blu-ray.

from a time when independent productions were more ambitious

Drive is filled with action and Dacascos kicks so much butt throughout the film.