THE CRITICALLY ACCLAIMED ANTI-ROAD-TRIP COMEDY WITH PLENTY OF MILEAGE! 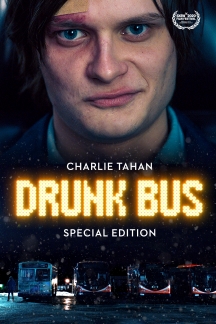 Michael (Charlie Tahan, Netflix's 'Ozark') is a recent graduate whose post college plan is derailed when his girlfriend leaves him for a job in New York City. Stuck in Ohio without a new plan of his own, Michael finds himself caught in the endless loop of driving the "drunk bus," the debaucherous late-night campus shuttle that ferries drunk college students from parties to the dorms and back. When the bus service hires a security guard to watch over the night shift, Michael comes face to tattooed face with Pineapple (Newcomer Pineapple Tangaroa), a 300-lb punk rock Samoan who challenges him with a kick in the ass to break from the loop and start living or risk driving in circles forever.

'Drunk Bus' is a rowdy sweetheart, directed with pluck by Brandon LaGanke and John Carlucci and written with comedic punch by screenwriter Chris Molinaro.

Drunk Bus, directed by Brandon Laganke and John Carlucci, is a deja-vu inducing coming-of-age story with enough character and good cheer to make you forgive how unadventurous it is.

Thanks to its charming cast and even-handed blend of laughs and drama, Drunk Bus generally succeeds in putting a fresh spin on its familiar story.

Delightfully crass with a comic heart, Drunk Bus is reminiscent of early Kevin Smith in telling a small time story around likable but miserable people.