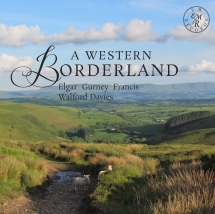 The counties on the borders between England and Wales - Gloucestershire, Worcestershire, Herefordshire and Shropshire - are rich in spiritual resonance, powerful historical imagery and a tangible sense of tranquility and apartness, which continues to appeal strongly to composers, writers and artists. This CD presents works for piano by four composers associated with this borderland. Edward Elgar was born just outside Worcester; the 'Concert Allegro', his only substantial piece for solo piano, was written whilst living at Malvern Wells. Ivor Gurney was strongly attached to his native Gloucestershire, and his 'Five Western Watercolours' paint sound portraits of favourite landscapes in that county. Walford Davies was born in Oswestry, Shropshire; his 'Theme and Variations', written whilst a student at the Royal College of Music, was rediscovered by Duncan Honeybourne, who gave its first known public performance in 2015. Richard Francis was born in Herefordshire and now lives and works in Shropshire: the works on this CD were given their première performances by Duncan Honeybourne.