MEET THE MANIAC & HIS FRIEND 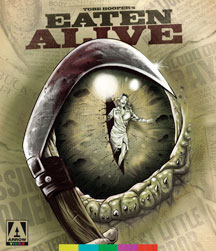 MEET THE MANIAC & HIS FRIEND. Nearly a decade before he donned Freddy Kruger's famous red and green sweater, horror icon Robert Englund delivered a supremely sleazy performance in Eaten Alive - another essay in taut Southern terror from Tobe Hooper, director of The Texas Chain Saw Massacre. Deep in the Louisiana bayou sits the ramshackle Starlight Hotel, destination of choice for those who like to check in but not check out! Presided over by the bumbling, mumbling Judd (and his pet croc which he keeps in a large pond out front), the patron of this particular establishment may seem like a good-natured ol' Southern gent - but he has a mean temper on him, and a mighty large scythe to boot... Oozing atmosphere from its every pore (the entire film was shot on a sound-stage at the famous Raleigh Studios, which lends it a queasy, claustrophobic feel) Eaten Alive matches The Texas Chain Saw Massacre for sheer insanity - and even drafts in Chain Saw star Marilyn Burns as the terrorised woman-in-peril, alongside William Finley and Mel Ferrer.

Sit back and enjoy the madness, the insanity, the completely mad ride into the Starlight Hotel

This release is one of the best from Arrow. It looks absolutely incredible.

An outstanding release by Arrow Video... If you are a fan of this film, you most definitely want to purchase this.

Arrow Video really pulled out all of the stops for this release, with some old and new special features. The new 2k restoration looks absolute immaculate and brings out the sleaziness of the film. You're not going to see it looking any better than this.