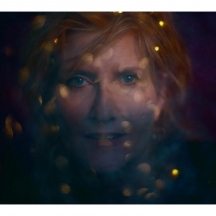 Cavalier is a new creative peak in an already prestigious career, just under an hour of new music, incorporating both contemporary and traditional songs. There are also a couple of new songs by her regular collaborator, Boo Hewerdine. Eddi is celebrating her 40th year as a live performer, a career which started in 1978 singing on Scottish country rock tours, then appearing on worldwide festival and concert hall stages with Gang of Four and Fairground Attraction through the eighties and her own successful solo live career which continues to this day. Available on CD and as a Deluxe Double 180g Blue Vinyl Gatefold with CD Album insert, limited edition of 500 copies. The album features the cream of the Scottish music scene including John McCusker, Phil Cunningham, Alyn Cosker, Euan Burton amongst many others. From the traditional to the contemporary, Eddi brings joyous life to all forms of song. Her taste in co-writers, writers, songs and players is impeccable and anything with her name on it is guaranteed musical treasure. Whilst the perfection of her technique is widely acknowledged, what sets Reader apart is the depth and quality of the emotional performance; her ability not only to move the listener but to connect her experience to that of her audience. Her passion and instinct move people in a way reminiscent of those who have influenced her work. Her rare blend of meltingly true vocals and towering romanticism combine with an astute and pragmatic nature to make her a unique and powerful figure in contemporary British music.