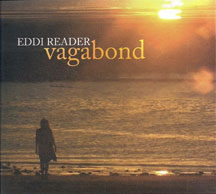 Recorded by Mark Freegard in Eddi's hometown of Glasgow with a cast of well chosen musicians and friends eager to play their part in this, most captivating, deeply personal yet universal sounding album. 'Vagabond' was produced by Eddi Reader and features many of her long-term musical collaborators including John Douglas (Trashcan Sinatras), Alan Kelly, Ian Carr, Ewen Vernal, Roy Dodds (Fairground Attraction), John McCusker and Boo Hewerdine. Eddi undertook an extensive UK tour in November 2013. Album Reviews expected in National Newspapers and Specialist music press around release "Eddi Reader is one of my favourite singers of all time." Jools Holland "The energy she uses in a single performance could probably power a wee village on the outskirts of her native Glasgow" The Scotsman "14 sublime tracks - there are several new songs written with her partner John Douglas and regular co-writer Boo Hewerdine, but also two songs from the tradition, which celebrate Eddi's Scottish roots" FolkRadioUK