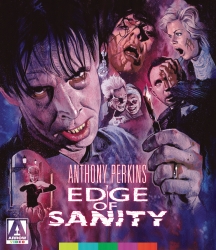 Anthony Perkins builds upon his legendary status as cinema's seminal psycho in Edge of Sanity, a delirious conflation of Robert Louis Stephenson's classic horror novella 'Strange Case of Dr Jekyll and Mr Hyde' and Jack the Ripper's real-life reign of terror over Victorian London. When his experiments into a powerful new anaesthetic go hideously awry, respected physician Dr Jekyll (Perkins) takes off into the night, casting aside the shackles of upper-class propriety as he disappears into the shadowy decadent demimonde of Whitechapel in pursuit of sensual pleasures under the guise of 'Mr Hyde'. As his wife Elisabeth (Glynis Barber) passes her time in charitable work, rehabilitating the district's fallen women, Hyde is drawn into an escalating cycle of lust and murder that seems to know no bounds. Produced by exploitation maestro Harry Alan Towers (The Face of Fu Manchu, Count Dracula) and directed with a hallucinogenic intensity by Gérard Kikoïne (Lady Libertine, Buried Alive), Edge of Sanity plunges the viewer into a labyrinth of depravity from which there is no escape.

The cinematography by Tony Spratling is outstanding and the locales and art direction are quite nice. The outstanding feature in this opus is the genuinely creepy performance given by Anthony Perkins.

...a solid thriller that works as well as it does because of Anthony Perkins' performance. Edge of Sanity gets an excellent release from Arrow Video that comes with a solid audio/video presentation and an abundance of informative extras, highly recommended.

It’s a great release with new cover art and plenty of special features. I recommend you pick it up as soon as you can.

...watching this new release has given me a better appreciation of the film.

Overall, Edge of Sanity is terrific fun and offers up a thrilling 90 minutes of sleazy sex and violence filtered through a lens of Victorian darkness and 1980s fluorescence.

Arrow Video has released a Blu-Ray featuring an A+ audio/visual presentation and an array of special features that fans will appreciate. If you are generally a fan of horror movies that delight in excess, this should be an enjoyable time for you. Recommended

Edge of Sanity is a unique film that stands out among other ’80s slashers for being a period piece, yet still feeling very much like a product of the beloved time period. Arrow Video brings you a disc you’ll be able to enjoy for many years to come.