Dirk Brosse is a Belgian conductor and composer. 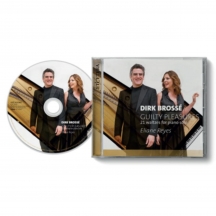 Dirk Brosse is a Belgian conductor and composer who has composed over 200 works, including concerti, oratorios, lieder, chamber music and symphonic works and was chosen by John Williams to Principal Conductor of the Star Wars in Concert World Tour. Dirk Brosse says of this recording: "I composed 21 concert waltzes for piano during the first lockdown in March 2020, to which I gave the rather mischievous title of "Guilty Pleasures". The waltzes, with one exception, are far removed from the familiar commercial stereotype of the Viennese waltz. My waltzes are stylized in form, eclectic in their musical language and primarily intended for concert performance. Surprising syncopations, hidden hemiolas and outrageous jazz rhythms conflict and contrast with the traditional waltz accompaniments, whilst the musical styles and genres range from purely classical, Romantic and atonal to jazz, Latino, Eastern, African and Chinese. The performance and recording of the 21 waltzes called for an exceptional soloist: for me, the much-praised Eliane Reyes was the ideal pianist to take up this challenge. Thanks to her faultless playing, feeling for color and nuance, her capability for empathy and her always enthralling interpretations, Eliane presents the essential character of each waltz with purity and simplicity. And there was more to come: we were able to record this new music on the Chris Maene Straight Strung Concert Grand."