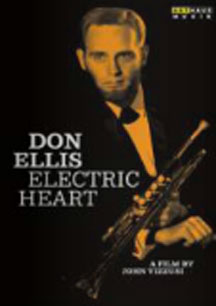 “Don Ellis – Electric Heart” is the story of one of the most innovative musicians of the 20th Century. Ellis (1934–1978) fused together a mixture of Jazz-Classical-Rock and his own version of World Music long before anyone else had thought of doing it. He was the first to experiment with odd rhythms as well as introducing electronics into the world of Jazz. His life, times & music is explored with interviews from musical giants such as bandleader Maynard Ferguson, Pulitzer Winning composer Gunther Schuller as well as pianist Milcho Leviev. Rare footage of Ellis overwhelms the film as Ellis attempts to take Jazz to new heights and never look back. Strangely, his life story and musical genius has almost been completely forgotten. The unforgettable short life of one of the greatest musicians of all time is explored and a re-birth of the electrifying and magical sounds of Don Ellis is back for all to enjoy!