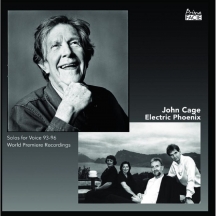 Prima Facie are pleased to announce the release a world premiere recording and one of the final works by legendary composer John Cage: 4 Solos for Voice: Solos for Voice 93-96, performed by Electric Phoenix. A detailed work for solo and overdubbed vocals the recording was masterminded by producer and musical polymath Daryl Runswick.

Daryl Runswick: "I met John Cage twice, and was as beguiled by him personally as everyone who met him was. The first time was in Zagreb on 21st April 1985 when he attended a concert by Electric Phoenix; the second in London on 19th June 1988 at a rehearsal of the piece he wrote for us, 4 Solos for Voice. For the recording, made several years after the world premiere of 4 Solos for Voice (and indeed after Cage's death) I as producer adopted several procedures which I hope he would have approved of.

'At the 1988 rehearsal, Cage stipulated that in performance we should ignore one another completely - never interact in any way. For the recording I decided we would record the four solos separately and not as an ensemble, and that the recordings would be assembled into performances later. In actual performance it is virtually impossible to ignore one another - although on stage we positioned ourselves apart and out of each other's eyeline - but here we could be truly independent. I therefore summoned each of the singers to John Whiting's October Sound studio alone and they recorded their music in the presence only of John and myself.

'We recorded each vocal event separately and stopped the tape (it was still Digital Audio Tape in those days) between events. In this way we could re-record an event as many times as we wanted until we were pleased with it. This meant we ended up with a collection of dozens of single events which could then be assembled into complete performances."

This historic recording is a must for the serious collector of avant garde music, challenging, inventive but ultimately very listenable.