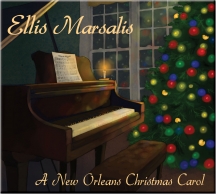 A nice, fun Christmas album that represents the holiday season and is great for the whole family, featuring familiar Christmas songs. REVIEW
''The elder statesmen of the best known family working in jazz today tackles a long list of timeless tunes in various configurations, from solo piano to quartet, and the resultant music is a display of pure pleasure and beauty. While the title of the album might lead some to believe that NOLA-slanted arrangements are plentiful, with second line grooves or Meters-style funk forthcoming, that's not the case. Marsalis merely uses the name of this collection to indicate from whence this wonderful music came.

In some places, Marsalis' playing simply evokes imagery of a family surrounding the piano to soak in the warm and tender sounds of the season on Christmas Eve ("Have Yourself A Merry Little Christmas"), but the majority of this music swings, sways and/or soothes in seemingly effortless fashion. Solos are succinct and stylish, and the arrangements are classy and charming.

Particularly notable performances include a trio take on Leroy Anderson's "Sleigh Ride," a warm interpretation of Vince Guaraldi's Charlie Brown-associated "Christmas Time Is Here," which features some fine vibraphone work from Jason Marsalis, and a rendition of "We Three Kings" that's built in the image of McCoy Tyner. "Christmas Joy," which features vocalist Johnaye Kendrick, is the better of the two vocal numbers on the record, but Cynthia Liggins Thomas' vocal performance on Thad Jones' "A Child Is Born" is far from second rate.

Each holiday season welcomes a new batch of Christmas-themed CDs, but far too many of them are ill-advised efforts to simply cash in on the spirit of the times. While it can be assumed that Marsalis would like to sell his music as much as the next person, A New Orleans Christmas Carol doesn't seem to have been made with that goal in mind. This is heartfelt music of merit