Ellis Marsalis' tribute to the music of Thelonious Monk. 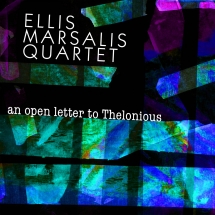 Ellis Marsalis and his quartet pay tribute to the music and genius of Thelonious Monk!

One of the most challenging demands placed on a jazz musician is interpreting another's works while utilizing the same instrumentation as the composer. Veteran pianist and jazz educator Ellis Marsalis admits that at one point in his career, he was not objective about Thelonious Monk as a composer, preferring the bop of Dizzy Gillespie and Charlie Parker. But with the passage of time and the opening of his ears to the subtle nuances of Monk's compositions, he is perfectly at ease playing his music on these 2007 sessions, which include his youngest son Jason Marsalis on drums, bassist Jason Stewart, and tenor saxophonist Derek Douget (who also doubles on soprano sax). While the opener ''Crepescule with Nellie'' doesn't stray too far from Monk's concept, the rollicking treatment of ''Jackie-Ing'' opens up the piece a good bit. Douget switches to soprano for a funky, New Orleans-flavored interpretation of ''Epistrophy.'' The driving take of ''Teo,'' a blues that Monk recorded just a few times, brings to the forefront one of his lesser known works. Throughout the date Marsalis keeps Monk's music very much alive with his inspired interpretations of the legend's compositions.