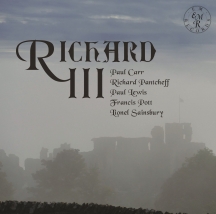 Em and Rupert Marshall-Luck perform new works by Paul Carr, Richard Pantcheff, Francis Pott and Paul Lewis, commissioned for EMF's Autumn Yorkshire Festival. A generous-minded leader; a superb military strategist; or an opportunistic villain: all these interpretations - and more - may be brought to bear on Richard III, one of the most controversial monarchs in British history. The English Music Festival recently commissioned four new works for solo violin from some of the UK's foremost composers which use as their inspiration the life and historical perspectives of Richard III; and, following their highly successful world première performances at the EMF's 2015 Autumn Yorkshire Festival, EM Records is delighted to present these engaging and thought-provoking works on disc. The recording was made in the Church of St Mary and St Alkelda in Middleham - the church at which Richard III himself worshipped during his periods of residence at Middleham Castle.