For her fifth solo album Echoes, Emily returns to her first love of traditional song. 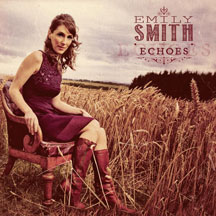 Having celebrated a decade as one of Scottish music's most distinctively sublime voices, Emily Smith begins a fresh chapter in her illustrious, award-winning, TV-appearing career. For her fifth solo album Echoes, Emily returns to her first love of traditional song. Her gift for finding a personal connection in these passed-down, anon-penned words is still at the heart of her craft. But this is a bold new phase in Emily's music and with it comes what she describes as "a new Scottish sound". Recorded over the space of a year (interrupted by the arrival of a small person) Echoes expands the core group of musicians with whom she's previously played by adding a guestlist of true greats. Joining multi-instrumentalists Jamie McClennan and Matheu Watson, bassist Ross Hamilton and percussionist Signy Jakobsdottir are none other than Jerry Douglas, Aoife O'Donovan, Kris Drever, Tim Edey, Natalie Haas and Rory Butler. Together they've created an album with one foot planted firmly in Emily's home of Dumfries and Galloway and the other in the unspoiled heartland of Nashville. If albums can have feet, that is. Echoes is unshakeably Scottish but with farther, wider horizons. From remembered ballads like the murdery Twa Sisters and the mythical King Orfeo to contemporary but no less timeless songs such as Bill Caddick's gorgeous John O'Dreams and Darrell Scott's The Open Door, Emily's voice eases tired ears and lifts knackered souls with its simple beauty. Time has passed ridiculously fast since Emily was named BBC Radio Scotland's Young Traditional Musician of the Year back in 2002. The accolades continued as she won the USA Songwriting Competition in 2005, Scots Singer of the Year at the Scots Trad Music Awards in 2008, and she received two nominations in the 2012 BBC Radio 2 Folk Awards.