Performing and recording a blend of pop compositions and Latin-oriented repertoire, he had regular big sellers the biggest being with "Carioca 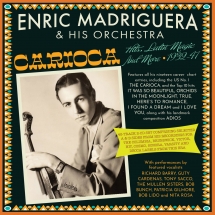 Enric Madriguera, born in Barcelona in Spain in 1902, was a classical violinist who moved to the Americas to become lead violinist in the Boston Symphony and Cuban Philharmonic before joining the studio band at Columbia Records, and starting his own orchestra in 1932. Performing and recording a blend of current pop compositions and more Latin-oriented repertoire, he had regular big sellers during the early 1930s, the biggest being with "Carioca", a No. 1 in 1934. This great-value 45-track 2-CD set comprises selected A and B sides from his recordings for the Columbia, Brunswick, Victor, Hit, Cosmo, Sonora, Varsity and Decca labels from this era. It features all his nineteen career chart entries, including the US No.1 "The Carioca", and the Top 10 hits "It Was So Beautiful", "Orchids In The Moonlight", "True", "Here's To Romance", "I Found A Dream" and "I Love You", along with his landmark composition "Adios", which became a Latin and pop standard. It includes many titles with performances by his by featured vocalists Richard Barry, Guty Cardenas, Tony Sacco, The Mullen Sisters, Bob Bunch, Patricia Gilmore, Bob Lido and Nita Rosa. This collection admirably demonstrates that as well as competing effectively with the many other successful "sweet" orchestras of the era, playing popular dance music, he brings a unique flavour of Latin magic to his music.