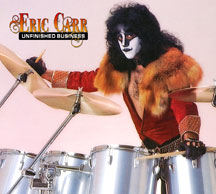 Legendary KISS drummer Eric Carr was an intricate part of the band for over 11 years. His powerful drumming rocked the music world through the metal eighties. Carr is still an influence on drummers and rock fans alike. This special 20th year commemorative CD release features over 17 rare Eric Carr recordings, including unreleased music, live performances, interview clips and more. Guests include members and former members of KISS, Twisted Sister, Seether, ZO2, Europe and more. This CD is a testament to a man whose personality and heart were as big as his enormous talent. Eric's spirit is alive in each and every song.