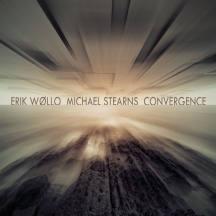 John Diliberto, Echoes Radio: “A new Michael Stearns album is a rare treat, but teaming up with Norwegian guitarist Erik Wøllo is a move that was unexpected but makes exhilarating sense. Stearns crafts ambient landscapes for Wøllo to stretch out on his skyscraping, icily poetic guitar solos. I never pick a CD of the Month so far in advance, but who is going to release something better'” Echoes Radio September 2020 CD of the Month

Soulful electronic sound-painting and evocative space music combine on Convergence, the debut collaboration between Norway’s Wøllo and America’s electronic /new age pioneer Stearns. Known for passionate soundtrack work on director Ron Fricke’s Chronos, Baraka and Samsara, Stearns collaborates on his first indie-label-released non-film-score since 2001. Together, these guitarists/synthesists weave a haunting and shadowy world filled with longing melodies and alluring glimmering sonic textures. Ranging from slowly-evolving contemplative and reflective tracks like “Somewhere in the distance” and “Subterranean Canyon” to hypnotically pulsing rhythmic movements in “The Nomad’s Journey” or the “The Herald,” the album is a subtle interplay between these two pioneering artists’ mystical and emotional sonic styles.

Chuck van Zyl, Star’s End: “Profoundly otherworldly, but always reassuringly human, Convergence occasionally gestures at the New Age, but then quickly reasserts the dreamy brilliance of its cosmic music credentials. Traversing a wider spectrum of emotions than is typically covered by the more technology-minded acts, Wøllo & Stearns present their atmospheric constructs in swaths of electronics and floating mists of harmony.”

Convergence develops an inner resonance that is visceral, the masterful blend of these two pioneering artists’ mystical and emotional sonic styles.