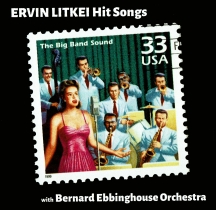 Ervin Litkei composed marches for every US President since FDR & had many played at inaugerations including LBJ and George Bush. At the Clinton inauguration he unveiled the March to a First Lady for Hilary Clinton, the first of its kind. This is the album of his pop compositions in his heyday, performed by the big band sound of the Bernard Ebbinghouse Orchestra, conducted by Mr Ebbinghouse