A group of college kids buy a mystical bong with the power to grant truly KILLER highs. 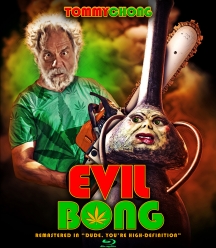 Straight-laced nerd Allistair moves into a college dorm with hardcore marijuana users Brett, Larnell and Bachman. Larnell orders an old giant bong that proves to have strange magical powers. When smoked, said bong sends a person to a bizarre drugged-out alternate realm from which there is no easy escape. Comedy legend Tommy Chong (of Cheech * Chong fame) headlines this cult classic weed-tastic romp, now fully remastered for the very first time ever!

The film is full of pot references and humor while delivering some of the best written characters I have seen in a horror comedy.