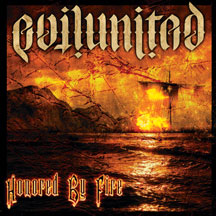 ...A contender for best 'pure' metal album of the year.

Evil United are somewhat of a super-group, formed from bands such as WATCHTOWER, RIOT and MURDERDOLLS and with enough collective talent and experience to not only do it right but do it with balls and style.

A surprisingly good, not to mention energetic release.

'Ripping Flesh' and 'Mind Over Pain' ride the lightning straight to the black hearts of denim-jacketed headbangers everywhere. Evil United don't fuck around.