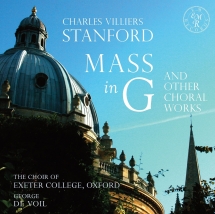 EMR CD021 features a choral work by one of the giants of British music, recorded here for the first time over a century after its composition. The Mass in G by Charles Villiers Stanford was completed in 1892 and is notable for its opulence, employing a full orchestra and vocal soloists as well as chorus; and its colourful, characterful setting of the liturgical text shows Stanford at the height of his powers – a master of structure, form and musical architecture. The Mass in G is complemented on this disc with works by another highly significant musical figure, C. Hubert H. Parry. His 'Songs of Farewell' are gems of choral writing, their intricately shaped lines and finely crafted textures pointing with a profound poignancy the meaning of their texts; the hymn 'Dear Lord and Father of mankind' and, especially, the unison song 'Jerusalem' are familiar and well-loved settings; whilst the processional 'I was glad', written for the coronation of Edward VII and performed at every coronation since, has a verve and splendour that epitomise the grandeur of ceremony. Stanford and Parry may be said to represent the beginning of the English choral tradition and this new disc acknowledges their lasting influence in a work by a contemporary composer, Nicholas O'Neill. 'Flyht' draws on texts by Samuel Wesley and Old English poetry from the eleventh-century Exeter Book. Marrying past and present, the work is a clear demonstration of the living choral tradition that continues to flourish today.