Girl On A Chain Gang [The Film Detective Special Edition]

Poor White Trash! Stay Clear - This Town Got Ways of Teaching You a Lesson! 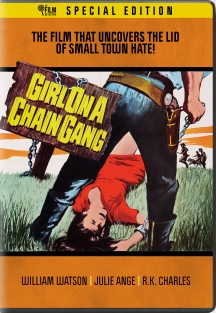 Schlock producer Jerry Gross made his directorial debut with Girl on a Chain Gang (1966), a stirring feature about small town hate. William Watson, Julie Ange, and Ron Charles star in this shocker about three young people who are framed, arrested, and tossed into jail by corrupt Southern police. Gross, who produced everything from Blaxploitation films to features about teen pregnancy, exercised his social conscience in this drama about racist Southern cops. It was made the year after three civil rights workers were murdered in Mississippi, a subject Gross must've believed was worth exploiting into drive-in theater fare. True to his low budget roots, Gross filmed this one nowhere near the South, but in Long Island, New York!