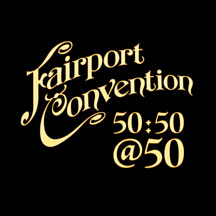 Fairport Convention, the UK's most influential folk-rock band, celebrates its 50th anniversary with 50:50@50. Half the fourteen tracks were recorded at recent concerts and half in the studio. With nine compositions by members of Fairport, the album presents a mix of brand new songs and favourites from Fairport's repertoire. Two tracks feature guest lead vocals: one from Robert Plant and one from Pentangle's Jacqui McShee. The band was formed by Ashley Hutchings in 1967's 'summer of love' and became one of the most influential UK bands in popular music nurturing the careers of, among others, Richard Thompson, Sandy Denny and Dave Swarbrick. Fairport Convention has attracted critical acclaim throughout its 50-year career and its influence has touched artists as diverse as Led Zeppelin and Seth Lakeman. The band's seminal albums Unhalfbricking and Liege & Lief (both released in 1969) originated the British folk-rock genre and Liege & Lief was later awarded a Gold Disc. The band has won a coveted BBC Lifetime Achievement Award and Radio 2 listeners voted Liege & Lief 'The Most Influential Folk Album of All Time'. In the words of bassist Dave Pegg: "This album shows Fairport is nothing if not versatile. The tracks range from new folk-rock (Eleanor's Dream for instance) to lively instrumentals (as in Danny Jack's Reward, a Ric Sanders tune augmented in this recording by Joe Broughton's Conservatoire Ensemble) to Chris Leslie's lovely lyrical songs (such as Our Bus Rolls On).The album also demonstrates Fairport's chameleon-like aptitude for collaboration. We become Robert Plant's backing band for Jesus On The Mainline (recorded live after a single run-through at The Mill theatre in Banbury) and we are joined by Pentangle vocalist Jacqui McShee on Lady of Carlisle"