Fake It So Real Book/DVD

Fake it So Real combine over-the-top theatrics of the wrestling ring with the realities of the working-class South. 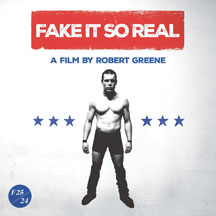 Fake it So Real follows a ragtag group of wrestlers in North Carolina over the course of a week leading up to a big show. The film explores what happens when the over-the-top theatrics of the wrestling ring collide with the realities of the working-class South. The wrestlers aren't paid for their passion, but they treat wrestling like any artist treats their work. Fake It So Real shares the triumphs and heartaches of an often under-appreciated American art form. BOOK/DVD Info: The 52 page book includes a look at the MWF wrestlers and their story lines. The DVD includes extra footage, a look at the NYC Rooftop Films NYC premiere, the MWF Mixtape, and wrestling promos by indie film luminaries including: Alex Ross Perry (The Color Wheel and Listen Up Philip), Michael Tully (Ping Pong Summer and Septien), Lawrence Michael Levine (Wild Canaries), The Ross Brothers (Western and Tchoupitoulas), Michael Bilandic (Hellaware), Jarred Alterman (Convento), Mark Elijah Rosenberg, Tom Hall, Daniel Metz, Aaron Hillis, Adam Shartoff and Craig Butta.