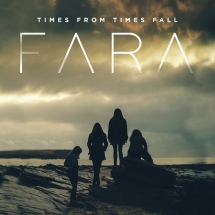 Fara brings together four leading musicians at the forefront of today's Scottish folk scene - Jennifer Austin, Kristan Harvey, Jeana Leslie and Catriona Price's three fiddles and a piano - to produce a fiery sound rooted strongly in their upbringing among the music of Orkney. Following a nomination for Up And Coming Act of the Year at the Scots Trad Music Awards in 2015, the success of their debut album Cross The Line in 2016, lead to a nomination for the BBC Radio 2 Folk Awards' Horizon Award. Fara also performed at 2017's prestigious event in the Royal Albert Hall, to a rapturous response. Also in 2017, Fara won the Preis der Deutschen Schallplattenkritik (German Critics Choice Award) and were nominated for Folk Band of the Year at the Scots Trad Music Awards. Their diverse activity with their other projects such as Blazin' Fiddles, Jeana Leslie & Siobhan Miller, Rachel Sermanni, and Twelfth Day, as well as accolades including BBC Radio 2 Young Folk Award, BBC Radio Scotland Young Traditional Musician of the Year, Deutsche Bank Award in Performance and Composition, and the Danny Kyle Award, hold them up as leading members of today's Scottish music scene. With vibrant arrangements full of rich harmonies, energetic fiddle playing and driving piano, Fara's music is an exciting experience. With a mixture of self-penned and traditional Orkney tunes as well as stunning vocals, the young women's combined musical experiences and friendships produce an exciting and individual sound.