Fast Eddie Clarke - Make My Day: Back To Blues

Former Motorhead guitarist returns to the blues on this acclaimed new album! 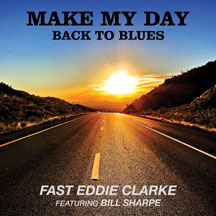 New solo Studio LP from one time Motorhead guitarist and leader of his current rock outfit FASTWAY. This is Clark's first new studio record since 2011.10 new studio tracks featuring Fast Eddie Clarkes return to playing the Blues, his first since his early days of live shows and recording with Curtis Knight's ZEUS in the early 1970s.

A genuine modern blues album... As good as many of them being put out today.

Fast Eddie still has the licks!