Ferocious Dog have been putting lockdown to good use by writing and recording their fifth studio album 'The Hope'. 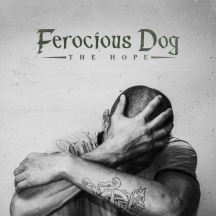 Ferocious Dog have been putting lockdown to good use by writing and recording their fifth studio album 'The Hope'. Instantly recognisable as a fusion of folk, punk and ska - but with newer members Ryan and Johnny really putting their stamp on evolving their sound further - the former adding much more bite to the electric guitar, with the latter juxtaposing this aggression with softer folky sounds. The ever-present traditional cover is here, right on-trend with a sea shanty vibe, the rest of the album flows irresistibly through tales of historical observations to biting commentary on the plights facing the world today. The songs follow a rollercoaster of pace and sentiment which will have you wanting to mosh one moment before having a moment to contemplate, coupled with a surprise collaboration and an overdue catch-up with how Mairi is getting on. A great follow-up to Fake News and Propaganda - Ferocious Dog seem to have the knack of evolving their sound enough to pique your interest, without losing any of the sound or attitude that made you fall in love with them in the first place. Once they're allowed out to play again they've given themselves a real headache in trying to pick a set list from their now burgeoning back catalogue.