Surreal comedy. Could there possibly be a better term to describe and define The Firesign Theatre? 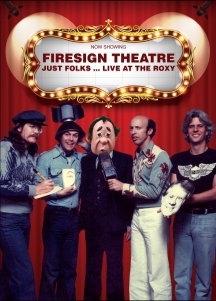 Surreal comedy. Could there possibly be a better term to describe and define The Firesign Theatre' Their creativity knew no bounds, their fans are legion, their irreverence unmatched and they continue to shine bright lights on the absurd while remaining purveyors of insight into the preposterous aspects of life in the 21st century. Sit back, close your eyes and open your mind to the absurdist surrealism and satire of the Firesign Theatre, LIVE.

'Don't Crush That Dwarf, Hand Me the Pliers' was named the greatest comedy record ever made

This is comedy that puts a smile on your face, and a laugh in your heart...'

In 1997, Entertainment Weekly ranked the Firesign Theatre among the 'Thirty Greatest Comedy Acts of All Time