Five medical students embark on a dangerous experiment to pierce the veil between life and death in an attempt to learn more about the afterlife. 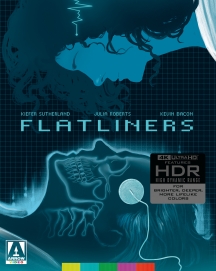 SOME LINES SHOULDN'T BE CROSSED. Known for his impressively eclectic filmography and for helping to launch the careers of several young Hollywood stars of the 80s and 90s, Joel Schumacher (The Lost Boys, St. Elmo's Fire) tackles the existential question that, at one time or another, haunts us all: what awaits us after we die? At the University Hospital School of Medicine, five ambitious students subject themselves to a daring experiment: to temporarily induce their own deaths, hoping to glimpse the afterlife before being brought back to life. But as competition within the group intensifies and their visions of the world beyond increasingly bleed into their waking lives, they're about to learn that the greatest threat comes not from the spirit world but from the long-suppressed secrets of their own pasts... Stylishly photographed by Jan de Bont (Basic Instinct) and featuring a cast of Hollywood's hottest talent - including Kiefer Sutherland (Twin Peaks: Fire Walk with Me), Julia Roberts (Secret in their Eyes) and Kevin Bacon (Wild Things) - Flatliners is the ultimate life-and-death thrill ride.

A heart-stopping, breathtakingly sumptuous haunted house of a movie

A magnificent restoration of this oft forgotten sci-fi horror from 1990 that can now be revisited in the best way possible with this gorgeous transfer and feature-rich package from Arrow.

For the ‘90s generation who brought extreme games to fruition, Flatliners represented the ultimate thrill – relying on medical science rather than a bungee cord to save lives.

Real fans of Flatliners may want to experience this 4K UHD version. I can't imagine anyone seriously arguing with the fact that this release is superior to the Sony release in both technical merits and some very appealing supplements. Recommended.

Director Joel Schumacher brings the candy-colored visuals with which he was synonymous to a medical school’s gothic architecture.

The fact that I like the characters despite their cavalier attitudes when dealing with matters of life, death and other consequences is a real compliment to all involved.

ARROW’s 4K UHD update is a welcome addition to the crypt for those looking to take a trip to the afterlife with now Hollywood acting royalty!

I believe this is the new definitive version of this film and should absolutely be in your collection.

One worthy of watching several times.

The bold visual choices mixed with a collection of talented young performers makes this one a solidly entertaining studio thriller with character.