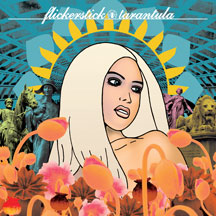 If Flickerstick is best known for its successful stint on the popular television series Bands On the Run, it's a distinction that one suspects keeps people from getting to the heart of the quintet's abilities. With a brief and modestly successful major-label affiliation behind them, these lads are undaunted and deserve to be heard, as evidenced by their capable, airwave-affable second album, Tarantula. Flickerstick does commercial alt-rock as well as anyone, be it the alluring, melodic roar of "Catholic Scars & Chocolate Bars" or the lush, glistening Church-like "When You Were Young." Although the textural, experimental "All We Are Is Gone" is hard to take and the rollicking "Teenage Dope Fiend" nicks the formula of Stone Temple Pilots' "Big Bang Baby," the group wins more than it loses. The sad-Beatles vibe on "Never Enough" comes up a winner, while "The Tourist" is downright awesome, beating sugary rock vets like the Foo Fighters and Cheap Trick at their own game.