Two sexy, grindhouse movies from the depths of the early 1970's Drive-In Theaters in a double feature Blu-ray for your viewing pleasure! 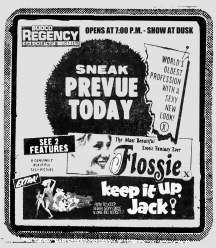 A young embassy officer in Stockholm has an unexpected and mysterious encounter with a strange woman who introduces the fascinating, yet inexperienced "Flossie" (Marie Forså) to him with the intention to gently and softly seduce her.

KEEP IT UP, JACK:

A failed music hall performer inherits a brothel when his aunt dies. He takes over the running of the business and falls in love with its star attraction, beautiful prostitute Virginia.