Foy Willings & The Riders Of The Purple Sage - Texas Blues: The Classic Years 1944-50

This collection offers a solid and representative overview of the key era of their career. 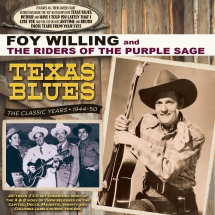 Taking their name from the landmark 1912 western novel by Zane Grey "Riders Of The Purple Sage", Foy Willing And The Riders Of The Purple Sage were a country group who combined recording and performing with appearing in a string of Western movies in the later heyday of the genre in the '40s and early '50s. Foy Willing, who hailed from Texas, landed up in California in the early '40s and became popular on radio, forming the band around the same time. With their screen commitments they did not record prolifically, but had five country hits through the second half of the 1940s. This 48-track 2-CD set comprises most of the A & B sides of their releases on the Capitol, Decca, Majestic, Varsity and Columbia labels during this era, including a release with the orchestra of Louis Prima. It features all their career chart entries including the No. 3 country hit "Texas Blues", the No. 4 hit "Have I Told You Lately That I Love You" and the No. 6 hit "Detour" along with the Top 20 hits "Anytime" and "Brush Those Tears From Your Eyes". Noted for their fine vocal harmonies, their style reflected their Hollywood outlook, with more then a hint of western swing about it, even though they recorded many songs by top Nashville writers. This collection offers a solid and representative overview of the key era of their career. They clearly had a significant influence on the west coast, their name being borrowed in the '60s psychedelic era by The New Riders Of The Purple Sage, a west coast country-rock band that was part of the genesis of Grateful Dead.