The meteoric rise of Frank L. Rizzo from cop on the beat, to law and order police commissioner, to controversial mayor. 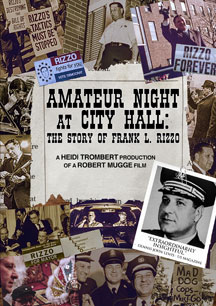 Francis Lazarro "Frank" Rizzo first came to prominence as a tough, headline-grabbing Philadelphia cop-on-the-beat in the 1960s. His increasingly mythic persona led to a 4-year stint as crusading, law-and-order police commissioner (1967 to 1971) and then 8 years (1972 to 1980) as Philadelphia's most polarizing mayor of modern times. While many working class white citizens saw Rizzo as their protector-in-chief in a threatening urban environment, minority citizens, liberal and wealthy whites, civil libertarians, and others saw Rizzo as an authoritarian bully who, himself, created a climate of fear and repression throughout the city. Robert Mugge's and Heidi Trombert's 75-minute film, AMATEUR NIGHT AT CITY HALL: THE STORY OF FRANK L. RIZZO, shot throughout 1977 and released in early 1978, illustrates key events from Rizzo's colorful and controversial career and attempts to analyze both causes and effects of his actions. Although the film was released before Rizzo's controversial assault on radical group MOVE, it chronicles attacks he ordered on Black Panthers and on young people lounging in Rittenhouse Square, his failed polygraph test, and his routinely tough talk ("I'm gonna make Attila the Hun look like a faggot." The film's primary theme is "politics as show business," and it includes many amateur musical performances from South Philadelphia's Triangle Tavern. Among the many interviewees are broadcast journalist Andrea Mitchell, local politicians including future Pennsylvania governor Ed Rendell, and stripper Blaze Starr who discusses her reputed affair with the self-proclaimed family man. The film had its 2-week world premiere run at Philadelphia's Walnut Mall Cinemas during the blizzard of early 1978. In January of 1979, PBS premiered an abridged, one-hour version titled RIZZO: A DOCUMENTARY MELODRAMA. Among the film's early awards was a 1978 Silver Hugo from the Chicago International Film Festival (the highest documentary award given that year). Transferred to HD from the original 16mm film and lovingly restored for the best possible viewing experience.

The New Objectivity. Balanced. A sense of fairness. Most absorbing.