Frank Zappa - From Straight To Bizarre 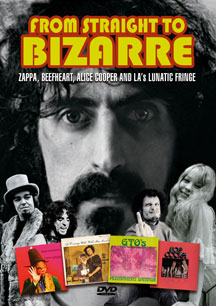 Desperate to remove himself from his original deal with Verve Records, in 1968 Frank Zappa he set up the Bizarre and Straight labels in league with manger Herb Cohen, and so began a string of releases which remain extraordinary in the extreme. Records by Frank himself and with his Mothers of Invention would rub shoulders in the label's racks with releases by notorious paranoid schizophrenic and part time songwriter, Wild Man Fischer, ex-groupies the all female GTOs, acapella gospel collective, The Persuasions, the first clutch of Alice Cooper records, Tim Buckley's enigmatic Starsailor, live recordings by Lenny Bruce and Lord Buckley, and a range of other musical oddities, generally of a quite startling quality despite their oft-eccentric content. But it would be a 1969 release by the Mother Superior's old teenage buddy Don Van Vliet - by then long re-christened Captain Beefheart - that would provide the art-statement for which the Bizarre/Straight enterprise is remembered best, and which remains to this day the pinnacle of achievement, not just at the House of Zappa & Cohen, but, for many, also within the normal confines of the genre loosely termed 'Rock & Roll'. This film revisits and reviews the astonishing music that came out on Bizarre and Straight, and reveals the background, operations and, crucially, the lives of the musicians, performers and management who made these labels the legendary reality they became. The film contains exclusive interviews with many of the labels' contributors including, Pamela Des Barres, John French, Jerry Lawson, Jeff Simmons, Dennis Dunaway, Neal Smith, Essra Mohawk, Miss Mercy, Kim Fowley, Bill Harkleroad plus authors Ben Watson, Barry Miles, Mark Paytress, Biily James and Ritchie Unterberger. Also includes rare footage, archive interviews, location shoots, extras - and of course the music that made it all worthwhile.

Ultimately, ironically, and perversely, From Bizarre to Straight strips away the commercial veneer erected even by Frank and is subversively factual, a demon's delight in a world of gushing fanboyisms.

This fascinating documentary is a must-see for anyone who appreciates music history.

The whole story of Bizarre/Straight and the events of those years is pretty incredible. From Straight To Bizarre is probably something of a must for Zappa-philes, for the live footage alone. It is hard to believe that a lot of this stuff went on, but it did. The DVD is well worth checking out.