Some things are more beautiful in death... Especially when your name is Frankenstein! 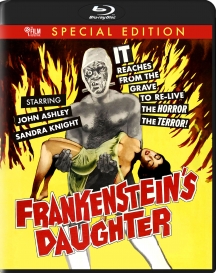 So says Dr. Oliver Frank at the sight of his new creation, a hulking beast with the transplanted brain of a beautiful young woman. He has finally carried on the legacy of his late grandfather, the notorious Dr. Frankenstein!

The twist in Frankenstein's Daughter (1958) is that it takes place in "modern" Los Angeles, where teenagers are forever in swim gear. Even as news reports warn them about a female monster menacing the neighborhood, nothing stops these kids from partying by the poolside.

Fans of low-budget horror will see some familiar faces in the cast, including John Ashley, Harold Lloyd Jr., and former Playboy Playmate of the Month, Sally Todd (just a year after her appearance in The Unearthly). For Director Richard E. Cunha, Frankenstein's Daughter was part of a productive year where he turned out three other cult favorites: She Demons; Giant from the Unknown; and Missile to the Moon. And though Donald Murphy lacked the schlock pedigree of his director and co-stars, his thousand-watt stare makes him a perfectly evil Dr. Frank.

[Murphy] gives a hearty performance as the arrogant, brilliant Oliver. He imbues his scornful scientist with a superior air and a wealth of passion.

The use of light and shadow in Alton?s work makes this Eagle-Lion effort well worth checking out in high-definition, especially since the movie fell into the public domain years ago and has never looked this good. Strongly recommended for genre fans of the era.

The film is an enjoyable slice of late fifties sci-fi that updates the Frankenstein story to that period.