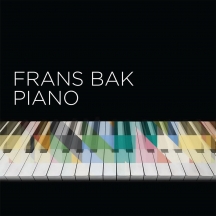 Having made music for film and tv shows in Scandinavia for a decade Frans Bak was asked to do the music for the groundbreaking Danish series Forbrydelsen (the Killing). This became an immense success and Frans Bak's music gave a new Nordic take on film music which inspired many other composers to follow this path.

In the following decade he got offers from all over the world and composed the music for series like Doctor Foster (UK) Disparue (FR) Lilyhammer (Norway) Conspiracy of silence" (SE) the Killing (US version) along with his work in Den- mark for film, theatre, tv and circus!

One day he saw an ad in the paper that the piano from his childhood was on sale and insisted on bringing it home. Playing on that piano again inspired him to take a breath, feel gratitude, and revisit the love of the piano - the simple melodies and wandering of the thoughts.

This inspired him to compose these new pieces focusing on the piano still in- corporating all the new experience he had travelling the world. Even though the piano is the main instrument - this album also features the great Norwegian cellist Live Johansson, and her quartet Live Strings - and it is produced by Frans' long time working partner Keld Haaning Ibsen.