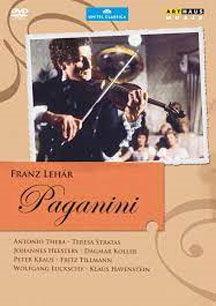 Franz Lehár's operetta "Paganini" (Vienna, 1925) marked the start of a new period in the composer's work that was strongly influenced by the tenor Richard Tauber. Lehár now began to write works that were highly demanding in vocal terms and stylistically closely modelled on the opera repertoire. The enormous success achieved by these works prove how right he was in not merely trying to make people laugh, but also to provide them with emotionally moving situations. One of the most successful operettas from this period was undoubtedly "Paganini", which includes the immortal melody "Gern hab' ich die Frau'n geküsst".Now for the first time, the legendary 1973 film version of the operetta offers an opportunity to experience once again stars like Teresa Stratas, Peter Kraus, Dagmar Koller and, last but not least, Johannes Heesters.