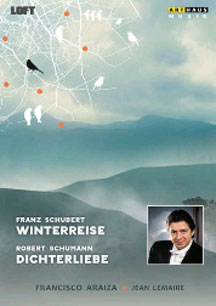 One year before he died Franz Schubert composed the great song cycle "Winterreise" (Winter Journey) after the poems by Wilhelm Müller. Being already very sick he created a masterpiece that - together with "Die schöne Müllerin" - holds the foremost place in the history of this genre. Francisco Araiza's interpretation of Schubert's very moving songs was recorded in 1993 at a Romanesque chapel and captures the beauty and tragedy of this work in an absolutely outstanding way. Accompanied by the pianist Jean Lemaire he also gives a superb performance of Robert Schumann's song-cycle "Dichterliebe", which has been recorded under studio conditions at the Renaissance Grafenschloss in southern Germany. The internationally-acclaimed Mexican tenor and lied singer Araiza has sung as soloist in leading concert halls and in leading tenor operatic roles in the major opera houses of Europe and North America.