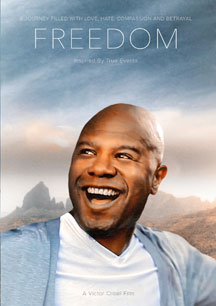 In Victor Crowl's new dramatic musical feature film "Freedom", we are taken on a melodic, rhythmic, dancing, emotional journey, filled with love, affection, forgiveness and redemption. The film begins as Victor arrives home in Toronto after traveling through Ethiopia, Jamaica and America, searching out his roots and the family he never knew and sharing his music with the people he meets. When he returns to Toronto, he finds that his love and compassion are desperately needed in his own circle of friends. The film tracks us throughout the summer of 2011 as his attempts to enrich the lives and relationships of young people struggling through bullying, racism, emotional, physical and sexual abuse. As he breaks down barriers of intolerance and bigotry, the people his actions affect find inspiration in him. Through his heartfelt, up-beat, catchy, and positive music, he is eventually able to bring both conflicted sides together. Victor's affirmations and encouragement shows young people that there is a way for them to fully believe in themselves and all of their potential. He wants them to find the gratitude in their lives, and to see all that they've overcome on their journey to find their freedom.