Seven of the most essential 'Jazz on Film' recordings made in the French New Wave era between 1957 and 1962. 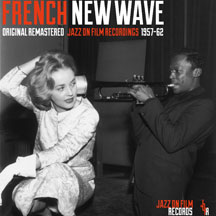 Gathered together for the first time on this 5-CD boxset, with a sixty page booklet, are seven of the most essential 'Jazz on Film' recordings made in the French New Wave era between 1957 and 1962. The set is Vol. 3 in the 'Jazz on Film' box set series, and is compiled and annotated by writer Selwyn Harris, producer of Volumes 1 and 2 of the 5-CD sets, 'Film Noir' and 'Beat, Square & Cool'. 'French New Wave' includes the Modern Jazz Quartet's 'No Sun in Venice', Miles Davis's 'Lift to the Scaffold', Art Blakey and the Jazz Messengers' 'Les Liaisons Dangereuses' and 'Des Femmes Disparaissent', Martial Solal's 'Breathless', Barney Wilen's 'Un Temoin Dans La Ville' and Michel Legrand's 'Eva'. The original albums have been remastered to a high quality by a specialist in the jazz field (as per the previous two volumes) and the set is completed with a 60-page deluxe colour booklet of in-depth essays on each film, written by Jazzwise's 'Jazz on Film' feature writer Selwyn Harris, with editorial consultancy by the esteemed author, critic and broadcaster Brian Priestley.