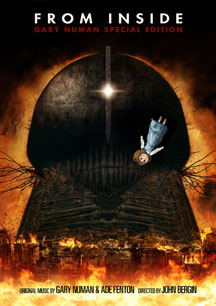 John Bergin's award-winning animated feature, FROM INSIDE, returns with a special edition score by Electronic and Industrial Music pioneer, Gary Numan, and music producer Ade Fenton. Based on the epic graphic novel by John Bergin, the film tells the story of Cee, a young pregnant woman travelling across a vast post-apocalyptic landscape on a train full of survivors. Cee holds onto hope as the massive locomotive pulls its passengers toward their destiny. John Bergin's work exists in a world of perpetual darkness. His artistry lies not so much in his ability to maintain this dark vision (which he does with a vengeance), but in his ability to build a rich and complex world inside such a singular dimension. The beauty of his art uplifts you, while its devastating message crushes you to dust. Numan and Fenton's score perfectly supports and complements the film's dark subject matter, breathing life into the story and keeping it on the hopeful side of suffocating nihilism. From Inside has screened in over 35 film festivals around the world and garnered Winner: Best Animated Film at the prestigious SITGES International Film Festival; Winner: Best Feature at Utopiales; Winner: First Feature at Fantasia, to name a few. About The Director: John Bergin is a writer, graphic novel artist, and musician, known for his book From Inside and his music to The Crow. Bergin was nominated for the Harvey Award for Best New Talent. About The Composers: Gary Numan is an Electronic and Industrial Music pioneer known for chart-topping hit singles and number one music albums over the span of over 30 years. His direct influence on music artists include Lady Gaga, Jack White, Battles, Kanye West, Prince, Nine Inch Nails. From Inside is his first foray into film scoring. Ade Fenton has been making and performing music for the last 15 years, establishing himself as a respected artist, record producer and remixer for acts including Gary Numan, The Duke Spirit, Slash IAMX and Motor.

Fans of Cormac McCarthy's The Road take note, here is the feminine version...

John Bergin's work exists in a world of perpetual darkness...