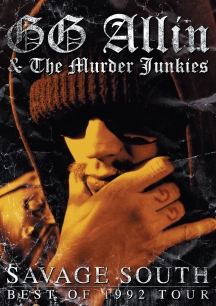 3 shows from February 1992 including the Wreck Room, Atlanta GA, DMZ, San Antonio, TX and Cavity Room, Austin TX as well as a previously unreleased GG interview. In February of 1992, GG Allin & The Murder Junkies would continue to pave a bloody path of destruction across the land. GG's shows were becoming more and more violent and confrontational.

3 shows in which GG takes punk rock to its absolute limit.

Truly communicates the chaos of a Murder Junkies show.