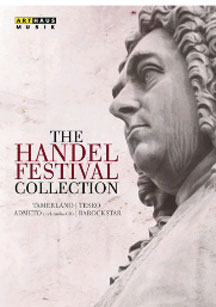 George Frideric Handel is one of the most prolific composers in the history of music. His body of work includes 42 operas, 25 oratorios, numerous cantatas and orchestral works and also pieces for piano, various chamber works, and sacred music. Arthaus-Musik is now releasing a unique box set, “The Handel Festival Collection“, comprising the operas ”Admeto”, “Tamerlano”, “Teseo”, and an additional documentary titled “Barockstar”. ”Admeto” was one of the most successful operas in the first half of the 18th century. Axel Köhler, the celebrated countertenor and director based in Munich, Halle and Berlin, staged ”Admeto” at the Opernhaus Halle in 2006, giving the opera an imaginative, contemporary twist: He set the historical work, which combines comedy, tragedy and an almost absurd grotesqueness in a modern-day hospital.Following the 2004 performance of Handel's fifth opera “Teseo”, the festival audience responded with rapturous applause. Under the musical direction of Wolfgang Katschner, the Lautten Compagney produced a stunning spectacle of Baroque music: A star-studded cast of singers performed the five-act 'magical' opera about the revenge spree of the affronted and jealous sorceress Medea.Inspired by the success of the opera ”Giulio Cesare”, George Frideric Handel composed “Tamerlano” in just three weeks during July 1724. The co-production on this DVD features the Handel Festival, the Goethe-Theater Bad Lauchstädt, the Theâtre des Champs-Elysées Paris, and the Sadler's Wells Theatre London with the English Concert conducted by Trevor Pinnock. It was recorded in 2001 and is the first ever staging of “Tamerlano” in the Goethe-Theater Bad Lauchstädt. The documentary film “Barockstar” tells the story of George Frideric Handel's journey as a composer through Europe in the Baroque era. It contains interviews with world stars and specialists in the field of Baroque music, among them Christopher Hogwood, Alan Curtis, Trevor Pinnock, Sandrine Piau and Christine Schäfer, as well as descendants of Handel's friends and patrons.