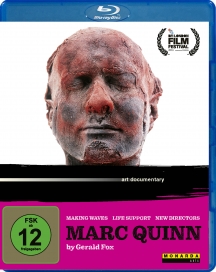 MAKING WAVES: Making Waves, a cinema feature film, takes the viewer on a roller coaster ride of Quinn's hectic life as he travels from openings and exhibitions of his work to studios and workshops where he conceives and creates his work. The viewer becomes a fly-on-the-wall as he unveils his giant bronze seashells in New York, his bonsai sculptures in Hong Kong and Istanbul and at a retrospective in Venice where the notorious 'Self' is exhibited to a delighted audience. LIFE SUPPORT: A mesmeric, stylised film with an original soundtrack by Massive Attack taking the viewer on a dreamlike journey into the artistic subconscious of the artist Marc Quinn. The film explores his marble portraits of limbless people including the famous Alison Lapper and abstract works using flowers frozen in time in silicone. Featuring guest appearances by Ai Weiwei, Elton John, Kim Kardashian, Kanye West, Daniel Craig, Lionel Richie and Heike Makatsch. NEW DIRECTORS: A short film by Franca Cereghini and Gerald Fox giving a deep and extraordinary insight into the creative process of one of Quinns works.