BBC reporters performing a live, on-air investigation of a house in Greater London, at which poltergeist activity was believed to be taking place 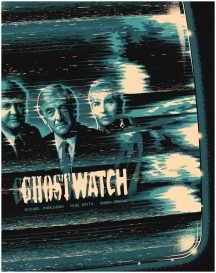 The BBC gives over a whole evening to an 'investigation into the supernatural'. Four respected presenters and a camera crew attempt to discover the truth behind 'The most haunted house in Britain', expecting a light-hearted scare or two and probably the uncovering of a hoax. They think they are in control of the situation. They think they are safe. The viewers settle down and decide to watch 'for a laugh'. Ninety minutes later the BBC, and the country, was changed, and the consequences are still felt today.

I love Ghostwatch. So scary!

Lawden's passion for Ghostwatch is shared by many of its younger viewers, drawn back in adulthood by its chilling allure [...] He scores an impressive coup in securing interviews with all the key players... A worthwhile enterprise.