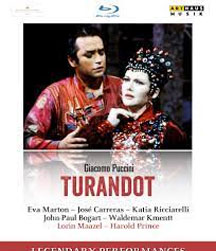 From the Vienna State Opera Arthaus presents a timeless document of great opera. Lorin Maazel and a dream cast of distinguished singers, among them the young Eva Marton and José Carreras in his mid-thirties, perform a celebrated staging of Puccini’s Turandot. Puccini’s last opera tells the story of the battle of the sexes against an exotic backdrop. The work tells the story of the beguilingly beautiful and cold yet seductive Chinese princess, Turandot. The opera is characterized by the tension it creates between the denial of love and secret affection, between self-sacrifice and obsession with sacrificial victims, and between cold cruelty and pure love. The performance was received with unanimous enthusiasm. Lorin Maazel scored a great personal success with audience and critics alike with passion, authority and brilliance in his conducting. The applause at the end of the performance lasted three-quarters of an hour and was directed not only at Maazel, but also at the team of wonderful singer-actors. The Hungarian soprano Eva Marton brought to the title role what one critic described as “a voice of gleaming metal in which one senses the beautiful woman lying in wait to defeat her opponent but is also aware of her fears of man in general.” Appearing alongside her as Calaf was José Carreras whose “unprecedented intensity” and “priceless tenor voice” were once again at the fore. Katia Ricciarelli was no less acclaimed in her role as “the best of all possible Liùs”.