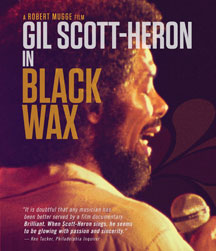 BLACK WAX is a musical-political entertainment film produced and directed by Robert Mugge in 1982. It was the first American film to be fully funded by Britain's then-brand-new Channel 4 Television and also likely the first film to use Steadicam from first frame to last. BLACK WAX centers on the late African American poet-singer-songwriter Gil Scott-Heron - the man Melody Maker called "the most dangerous musician alive" and many dubbed the forefather of rap music - and his 10-piece Midnight Band. It was filmed entirely on location in Washington, D.C., primarily at the Wax Museum Nightclub (now defunct). Songs performed by the band include such potent political numbers as "Winter in America," "Alien," "Johannesburg," "Storm Music," "Waiting for the Axe to Fall," "Gun," and "'B' Movie" (a scathing analysis of how and why Ronald Reagan was elected President of the United States). Between songs, Mr. Scott-Heron is shown reciting his equally powerful poems ("Paint it Black," "Black History," "Billy Green is Dead," The H2O-Gate Blues," and "Whitey on the Moon"), leading the camera on a unique tour of Washington, D.C. (from the monuments of official Washington through the minority neighborhoods that make up most of the rest), and finally confronting the "ghosts of America's past" (life-sized wax figures of John Wayne, Uncle Sam, Neil Armstrong, Benjamin Franklin, Betsy Ross, four U.S. Presidents, and black leaders from W.E.B. Du Bois to Martin Luther King). This is Mr. Scott-Heron at the absolute peak of his powers. The politics is always entertaining, and the entertainment is nothing if not political.

There are musicians whose work can't easily be encapsulated by the documentary film format, and there are others, like Gil Scott-Heron, who make a particularly keen impression. BLACK WAX, which was adroitly directed by Robert Mugge, offers Mr. Scott-Heron a chance to explain his concerns and convictions at length, and he rises to the occasion. The scope of his topical, ascerbic songs and poems is well-represented. Mr. Mugge captures his subject with easy comprehensiveness.

It is doubtful that any musician has been better served by a film documentary than Gil Scott-Heron has in Robert Mugge's BLACK WAX. Brilliant - funny, moving and fast-paced. When Scott-Heron sings, he seems to be glowing with passion and sincerity.

One of the more entertaining and edifying music docus of recent times, one which strongly communicates the personality of the subject. A fine introduction to a vibrant, nervy talent.

BLACK WAX is an intelligent and crisply edited exploration of Scott-Heron and his work.

The footage of Gil Scott-Heron carrying a ghetto blaster and rapping along to his own verse was a stroke of pure genius.

Gil Scott-Heron was one of America's greatest poets, musicians and ultimately, its social conscience. As a musician his works have maintained their freshness and vitality years later, and this 1982 documentary by Robert Mugge showcases this brilliant and outspoken man on stage and in his hometown of Washington, D.C. For those not familiar the film serves as a great introduction to his passion and craft, and for those already acquainted with Scott-Heron, it will only increase the respect that the man commands. It looks wonderful on Blu-ray.